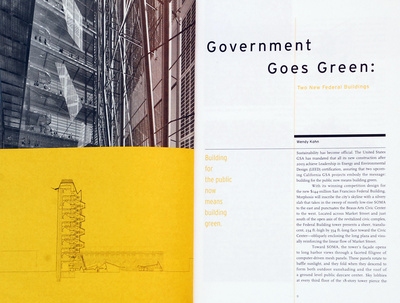 Sustainability has become official. The United States GSA has mandated that all its new construction after 2003 achieve Leadership in Energy and Environmental Design (LEED) certification, assuring that two upcoming California GSA projects embody the message: building for the public now means building green.

With its winning competition design for the new $144-million San Francisco Federal Building, Morphosis will inscribe the city’s skyline with a silvery slab that takes in the sweep of mostly low-rise SOMA to the east and punctuates the Beaux-Arts Civic Center to the west. Located across Market Street and just south of the open axis of the revitalized civic complex, the Federal Building tower presents a sheer, translucent, 234 ft.-high by 354 ft.-long face toward the Civic Center—obliquely enclosing the long plaza and visually reinforcing the linear flow of Market Street.

Toward SOMA, the tower’s facade opens to long harbor views through a faceted filigree of computer-driven mesh panels. These panels rotate to baffle sunlight, and they fold when they descend to form both outdoor sunshading and the roof of a ground level public daycare center. Sky lobbies at every third floor of the 18-story tower pierce the layered building face with protruding, Breuer-like polygonal windows. These stone-framed portals, fitted with large, pivoting glass panels, join a three-story sky garden on the nth floor to offer workers shared access to the outdoor air, panoramic views, and direct natural light. Eighty percent of the office space will be daylit, supplemented by direct task lighting.

With its main entrance on 7th street, facing the existing U.S. Court of Appeals building, the federal tower will set the backdrop for a permeable, southeast-facing, 37,000 square foot, landscaped public plaza along Mission Street. The plaza will be defined by the 1905 Beaux Arts stone facade of the Appeals Court and by a new, transparent, four-story annex containing the most visited functions of the federal complex. A public cafeteria, at the corner of Mission and 7th Streets, will reinforce the communal nature of the plaza.

Thom Mayne describes the tower’s skin as “metabolic”: prevailing northwest winds will permeate the facade through operable awnings and, with the help of an advanced monitoring and distribution system, a largely open floor plan, and a stack effect through the southeast facade, will allow natural ventilation to cool 70% of the tower’s work area. Night breezes will be admitted to chill the long, narrow (65-ft. wide), concrete structure, effectively incorporating each basic building component as a functional tool in the service of a comprehensively sustainable architecture.

In downtown Los Angeles, the winning Perkins & Will competition scheme for a new federal courthouse makes abstract reference to the pillars of justice and the transparency of the legal system. Facing south toward Broadway, a monumental curvilinear “solar curtain” wall arcs and rises the full height of the 16-story tower, collecting energy and gray (rain) water while cradling an inviting civic plaza outdoors and creating a sweeping, full-height civic window from within. Kite-like sunshades alleviate heat gain, while the soaring room acts as a thermal vent to draw natural ventilation in and up through the building. Replete with evaporative, desiccant cooling and earth tubes for thermal storage, the million square foot building (with a projected construction cost of more than $300 million) consolidates all District Court functions in a heavily-secured but highly-sustainable architecture.

Cradling the canted glass sun wall, a wing composed of five column-like fins stacks suites of judges’ chambers vertically, providing each suite abundant daylighting and views towards the county courthouse and new Disney Concert Hall. At each level, daylit courtrooms are similarly stacked, interspersed with the judges’ chambers for easy access, but set back to provide intimacy for the proceedings and gardens for the ground level.

A short ell holds the secured central entry point at plaza level, at the corner of Broadway and First Street, establishing a direct axis with the 1928 City Hall tower that dominates LA’s civic district and, above, thrusting triple-height lobbies out toward Broadway. With views on one side across the civic center (the largest government complex outside Washington, DC), and on the other side across the curving courthouse lobby, these platforms— balanced between interior and exterior—exemplify designer Ralph Johnson’s emphasis on locating each programmatic element specifically in response to the site, environmental opportunities, and the other district court functions. His “architecture of accommodation” includes a special proceedings court and garden at the roof level, where, by 2005, a polygonal cupola will beckon toward the pyramidal crown of City Hall and add a new, lit beacon to the downtown Los Angeles skyline.
Made with Viewbook